On August 30th 1993, the land that was to become the Eastern Prom Trail passed into public ownership. Nathan Smith, noted at the celebration a few days later ‘ One hundred years from now, this land will have been on the market once in 247 years’.

Nathan Smith will be speaking on the remarkable timing and sequence of events and people who helped seize the opportunity to assure trail access for almost two miles along the water’s edge in a 350 year old City. Not coincidentally this effort overlapped with the founding and early days of Portland Trails and Nathan will share a few stories, from a unique perspective, about Portland Trails at the beginning. 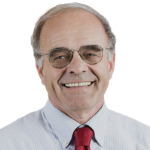 Nathan Smith, a Co-founder of Portland of Portland Trails along with Dick Spencer and Tom Jewell, and its first President, has been a an attorney with Bernstein Shur since 1982 where he is now Of Counsel. He was a Community leader in Portland for over three decades and served on the Portland City Council from 1998 to 2004 and as Mayor in 2003-4. For his work as ‘point man’ on the Eastern Prom Trail he received the National Park Service’s first ‘Conservation Hero’ Award presented in the State of Maine. Nathan and his wife Eleanor now live in Kealakekua on the Big Island of Hawaii.