Outlook explores variables that shape and influence individuals relationships with nature and how they seek to inspire, adapt and reimagine what conservation can look like moving forward in a world where Climate Change is affecting a broad range of human and natural systems. 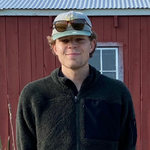 Dams have long been controversial structures. They, on the one hand, have the potential to provide clean energy through hydroelectric means, ensure adequate water supplies for irrigation, prevent flooding, etc. On the other hand, what are often the older, more derelict dams have the potential to become infrastructural hazards, barriers to fish migration, obstructions for natural sediment flow, the list goes on. This is why I’ve always been fascinated by the idea of removing a dam. It’s an ironic process of rewilding – of using human intervention to undo a previous human intervention and revitalize what we’ve deemed to be “natural.”

My wish to see a dam removal first-hand recently came true thanks to Maranda Nemeth, the Project Manager overseeing the removal of Walton’s Mill Dam in Farmington, ME. As a part of the Atlantic Salmon Federation, one of Maranda’s major goals is to conserve and restore wild Atlantic salmon and their ecosystems. Walton’s Mill Dam (now almost completely removed) used to sit along Temple Stream, which feeds into the Sandy River and later the Kennebec River. Temple Stream is extremely important as it has the largest contiguous amount of habitat for endangered Atlantic salmon in Maine. Removing the dam, according to Maranda, “opens up nearly 53 miles of stream to the Sandy River.”  This would be extremely helpful to Atlantic salmon, which use Maine rivers to spawn. The $3 million dam removal project, however, is not limited to just helping just salmon and related fish and wildlife – it opens up wonderful opportunities for recreation and the preservation of history. The project, supported with major help from the Atlantic Salmon Federation, the National Oceanic and Atmospheric Administration, Maine Department of Environmental Protection, Maine Department of Marine Resources, Maine Natural Areas Program, U.S. Fish & Wildlife Service, and Land and Water Conservation Fund is restoring the park with a new overlook, landscape, and open spaces for the Farmington community to enjoy.

When I arrived at the removal site, I was immediately struck by the sheer size of the operation. Although some may consider the 300 foot dam to be relatively small, the mix of a huge excavator and Maranda’s well-coordinated team moving each and every way really made this appear like quite the operation. Maranda walked me around the site, explaining the complexities of a project like this. Removing the dam meant that the team had to revegetate sizable sections of the upstream impoundment. A diverse mix of plants were used here, each carefully selected from the surrounding environment to ensure that the area can grow back to its natural state. On the downstream side of where the dam had been removed, the team was working to rebuild the river bed to improve sediment flow and facilitate fish migration. This was the aspect of the project I was able to see with my own eyes and, man, was it cool! As we stood and spoke, an excavator carefully moved large stones (which were previously used to build the dam) and old root wads to reconstruct the river bed. While the stones mimic the natural environment of the river, the root wads provide habitat for all sorts of little river creatures to thrive.

When it comes to climate change, Walton’s Mill Dam removal is extremely significant for two major reasons. Firstly, Maranda as well as Bill, an on the ground figure for the U.S. Fish & Wildlife Service, who I was also fortunate enough to speak with, noted how old dams like these pose significant hazards to the surrounding community when flooding occurs as a result of big storm events. Climate change is beefing up the impacts of these storms and increasing the rate of their occurrence, thus straining key structural components of the dam. If the dam were to collapse, it could damage downstream vegetation, wildlife, and infrastructure. These impacts are saddening and costly. Secondly, according to reports from the USFWS, Walton’s Mill Dam served as an obstruction to some of the coldest waters in the Northeast, environments that are ecologically prized for the health and future viability of various fish and wildlife. As many may know, climate change is contributing to a significant rise in water temperatures, making these environments extremely hard to come by. The removal of the dam is opening up access to these cold water habitats and hopefully providing avenues for fish and wildlife to shelter from climate-related hazards.

It was a pleasure to visit the dam removal site. Maranda, thank you so much for the tour!! If you are interested in reading more about the Atlantic Salmon Federation and their work, check out this link.